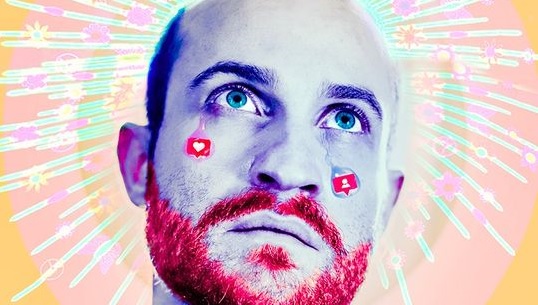 He came to widespread attention with his gags seen across Instagram, Twitter, Facebook, and YouTube, retelling the news from a completely personal and original point of view. After a long apprenticeship and training, he graduated with a Diploma from the Scuola Biennale per la Formazione Teatrale e l’Improvvisazione di Improvvivo (Milan). Italian actor/web personality Paolo Camilli was born in 1986, and is originally from Civitanova Marche. Since 2017, he is also credited as an author and director. His videos always start from a cue, “From a track! Then turning, things come out that I hadn’t even thought of.” From theatre to the web, then to television, advertising, short films, and his wildly popular Instagram stories, Camilli possesses a subtle, delicate, simple and immediate irony.

In this interview, Camilli speaks candidly to FRONTRUNNER, with every word carrying the humility of someone doing their job with spontaneity, passion and dedication. And laughter is assured.

When did you know that acting would be your way? Tell us about your beginnings and your first time in public.

I knew back when I was 20, when I decided not to care about my parents’ concern because it was, “not a safe job”, and I followed what I felt. Today, considering the crisis we are experiencing in every sector, I think I made the right choice, because there is no really “safe job.” I have always loved acting, since kindergarten. I still remember the arduous task of impersonating Joseph in a living Nativity scene, and the disgust I felt for that bug that I saw walking on the straw, right next to my costume, just as all the parents were watching the scene. But, even then as a true professional, I breathed deeply and pretended [it was] nothing, because somehow I already knew that, “the show must go on”.

After the great performance of Giuseppe in the Bethlehem cave, I remember my first performance in elementary school. We had to say a line, and so my turn came. I opened my mouth and put a tooth on the microphone…but despite this, I continued with great nonchalance. My mother told me that I had also said, “Sorry” for the emotion and the nonsense; I didn’t even know what I said.

If there are any, who are your reference models for acting?

I don’t have standard reference models. Unknowingly, you are caught by anyone you find akin to your language and your idea of acting. But I can tell you who I’ve always loved, unconditionally: Meryl Streep.

Do you remember the first video you launched on social media? Any anxiety about your first feedback from the public?

The first video launched on social media was a 6-second video, it was created on Vine. I was crossing, by chance, two girls who were humming the song “Chandelier” by Sia. I could not resist. I took off my hat, which hid Sia’s blond bob, and started dancing as in the video. Yes…all this in six seconds. The video went viral and I was amazed at the amount of notifications. The anxiety of the feedback, initially, was not there. Maybe it came later!

From planning to the final product, how long does it take to make a segment? Do you have collaborators?

Obviously it depends on the type of gag. The time I really need is to decide to do it. I think I go around and assemble it all by myself, and often this weighs on me. In fact, when I find someone to share the idea, and the effort, I like it even more!

How did the need to tell current events in an ironic key arise?

It arose from the need to find and have a voice. In the pre-social media era, communicating through your language was more complex. Now social networks allow us to communicate as we see fit and, above all, to reach people all over the world. The use of comedy also allows us to send serious and important messages that can settle in the audience through laughter. You believe you are simply laughing at a joke or a gag, but that information, that message is rooted in your unconscious. Like a small seed, it can contribute to giving rise to new awareness.

Speaking of current affairs, how was your quarantine?

Despite everything, it was a pleasant quarantine. At home, I was fine. I didn’t suffer from the cloistering and I took advantage of the enormous free time to create content to be able to play down and lighten an unexpected and complicated moment for everyone.

Your posts carry so much positive messaging for everyone. What is your opinion on the topic of inclusion? International movements #BlackLivesMatter and LGBT rights are on the current agenda. Tell us your points of view.

Every time I think about how far it’s come and how much more there is to do; there is always this witch hunt for the different…just to be able to divert attention from yourself, from your responsibilities. This constant search for an external enemy has come to a dead end, stagnant, because man is now called to deal with himself, without “if” and without “but”. Furthermore, I think the labels were necessary and fundamental to explain, include, clarify, and protect us. But, now we also need to start a long phase of deconstruction, to allow us to no longer have to explain but simply BE!

What is a video you would like to make, but for some reason you haven’t done yet?

I would like to redo a 90s music video, like Britney Spears’ “Baby One More Time” with locations, outfits, lights, and direction totally faithful to the original!

In short, who is Paolo? Is he the person he would like to be?

Paolo is a boy who has made his anxiety the fundamental resource for being able to work on himself. I am proud of myself, of the path I have done and am taking…

I am proud that I did not give up on “not myself”. Feeling fully myself is the most important goal I have set myself: to shake off insecurities, fears and live this life to the full. Once this is achieved, the rest will be just a magnificent discovery and adventure to be experienced.