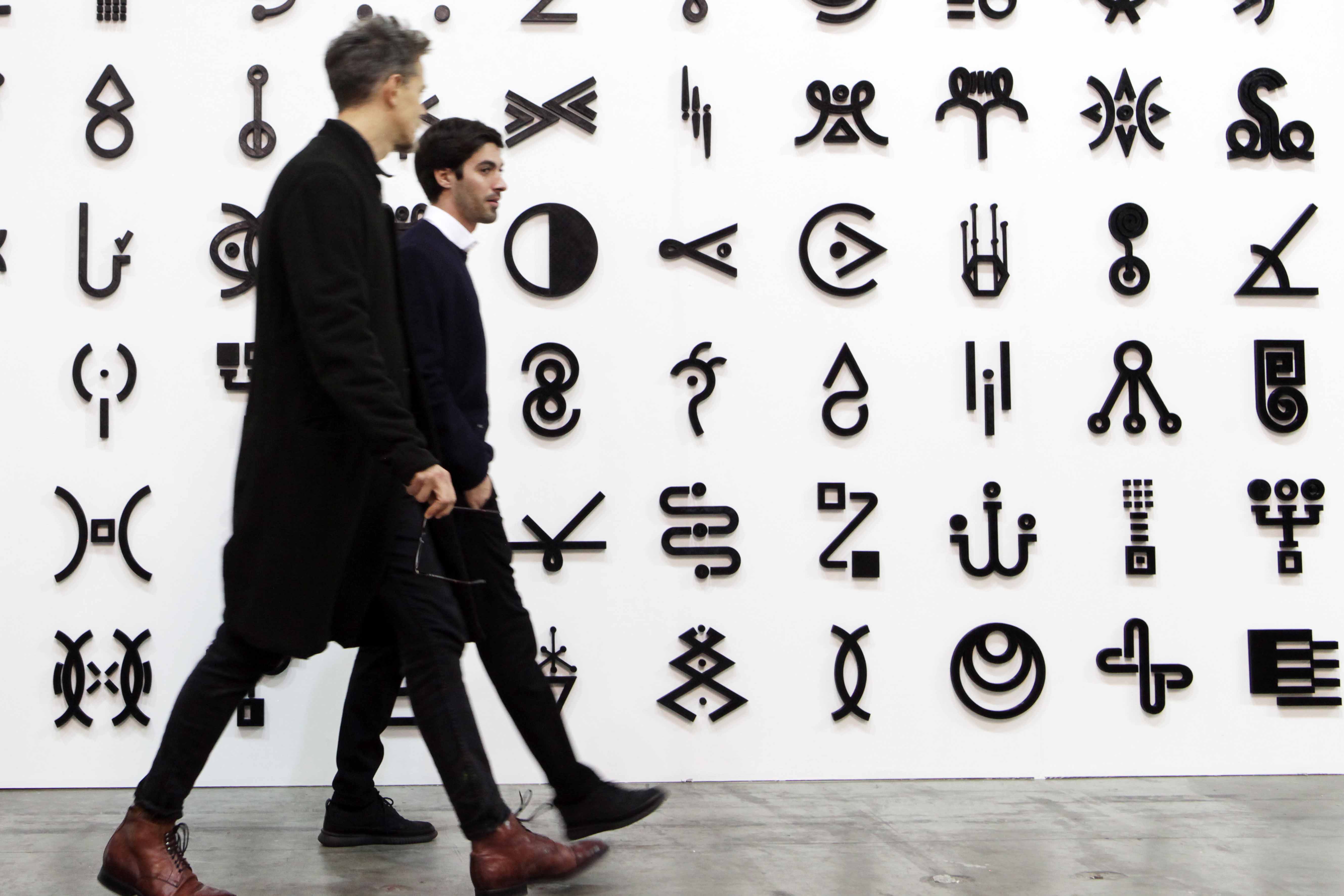 The 25th edition of Artissima, the international contemporary art fair in Torino, was held from 1 to 4 November 2018 and was directed by Ilaria Bonacossa for the second time. The theme this year was ‘Time Is On Our Side’, about the art of the past and also the future with new creative languages. Each year, Artissima unites directors and curators from all over the world, where collecting, commissioning and collective research meet to challenge comparison and the market. The numbers for Artissima 2018: 54,800 total visitors (2,800 more than last year), 195 galleries from 35 countries; of which 79 were Italian, 116 foreign and 47 presenting for the first time at the fair.

The Sound section was the novelty this year at the OGR (Officine Grandi Riparazioni of Turin), where The Chemical Brothers, New Order and Kraftwerk have performed. It was curated by Yann Chateigné (art critic in Berlin and professor in Geneva) and Nicola Ricciardi (artistic director of the OGR). The section had sixteen artists including Ugo La Pietra, with his installation Audio Casco (1967) of Studio Dabbeni di Lugano, and Marzio Zorio for the Raffaella De Chirico Gallery (Torino) with the his work Biblioteca (2018). Sound was chosen because it was considered the most important medium, offering a lot of information and connections. As visual art, for this reason, the sound must have its market and its collectors. In addition, at OGR, there was the site-specific installation L’Atteso by Mike Nelson, curated by Samuele Piazza that will remain until 3 February 2019.

Other major sections of the fair were:
Back to the Future: devoted to artistic practices from 1980 to 1994)
Present Future: dedicated to young, emerging artists
Disegni: focused on the drawing medium

Frontrunner spoke with curators from each of these major sections.

Back to the Future is formed by 20 stands and speaks of the art of the past. How was the section born, and is there a connection between the languages of past art with current arts?
Anna Danieri (independent curator): This year, Back to the Future presents artistic techniques that preceded the birth of Artissima from 1980 to 1994: crucial years for political issues, such as the fall of the Berlin Wall. Afterwards, there was an opening of the borders also in the art system with globalization, also for developing countries with the exhibition Magiciens de la Terre (1989). Back to the Future is a section that represents the artistic production of that period which at the time was marked by the return to painting. But in this case, the curators Cristiano Raimondi (Nouveau Musée National de Monaco), Gabriela Rangel (Americas Society of New York) Pietro Rigolo (The Getty Research Institute of Los Angeles) and I decided to sample different languages: from an artist who works with anthropology like Claudio Costa, to the feminist artist Margaret Harrison who talks about women’s work, then Gary Hill and Tania Mouraud (one of the first artists to work in public art with ‘barcodes’ that lead back to technology through the pictorial medium) and then Teresa Lanceta who works with the artisan carpet technique. There are artists very different from each other and we are very proud to represent, as in the case of Eduardo Rubén for the first time in an international fair.

The Present Future section presents emerging talents. How did the selection of artists take place and what do you recommend to a young artist who wants to work in art?
Cloè Perrone (independent curator): The Present Future section has a team of curators that changes every year and selects the participating artists. This year with Myriam Ben Salah (curator and writer in Paris) and Juan Canela (independent curator and writer from Barcelona) we invited some artists, but the big news is that there were also spontaneous candidatures. I received the dossier of artists from all over the world and in this case, too, we selected some of them and this was very useful to give a more complete view on what is happening in the world today. Spontaneous applications have also been useful for making new discoveries, meeting new artists and presenting innovative projects. Technology always helps to renew and think about other tools and languages: they are fascinated by projects with robotics and artificial intelligence. In the past, I have worked with international artists who use bronze and fresco, so it is important to reinvent the already-used mediums and make them more contemporary. In general, [to] emerging artists, I suggest to study and work a lot, because he or she who is good emerges and if one does not come from the contemporary art world, they work more but eventually make it. Finally, it is important to travel and not to remain self-referential.

How was the Disegni section born and what is the relationship between the art of drawing and collecting?
João Mourão and Luís Silva (directors of the Kunsthalle Lissabon, Lisbon): It is the second time that Disegni is presented at Artissima, thanks to director Ilaria Bonacossa. It is a very interesting section formed by 23 artists, represented by 24 galleries and although today there is a lot of technology in art, drawing is a different technique and for artists it remains a powerful way to tell what happens in the world. We try to communicate this aspect with our section. “We think that drawing is an interesting type of art to start a collection because it is not very expensive”, says Silva. “It is a way to bring young people especially close to collecting and supporting artists, but also galleries. It is an art very close to people of any age and this is beautiful”, concludes Mourão.

Frontrunner’s Artissima 2018 Honorable Mentions:
One of the most interesting works from Artissima 2018 is Etimografia, a 2013 work by David Reimondo in which he reinvents the language in ideogrammatic code formed by roughly four thousand signs visualized both in wood and digital format. In this case, there is the fusion of traditional and innovative artistic techniques.

The installation Untitled (2018) by Thomas De Falco for the Richard Saltoun Gallery (London), where a real naked woman screams at a voiceover. The model is surrounded by some roots of trees to express the power between human and nature.

Young Cuban artist Luis Lopez Chavez of Galleria Continua presented Los sintomas del engaño (2018): in a transparent case, he shows some bottles that look like simple containers, but these contain poisons that the artist has obtained from some toxic Cuban plants. Appearance can sometimes be lethal.