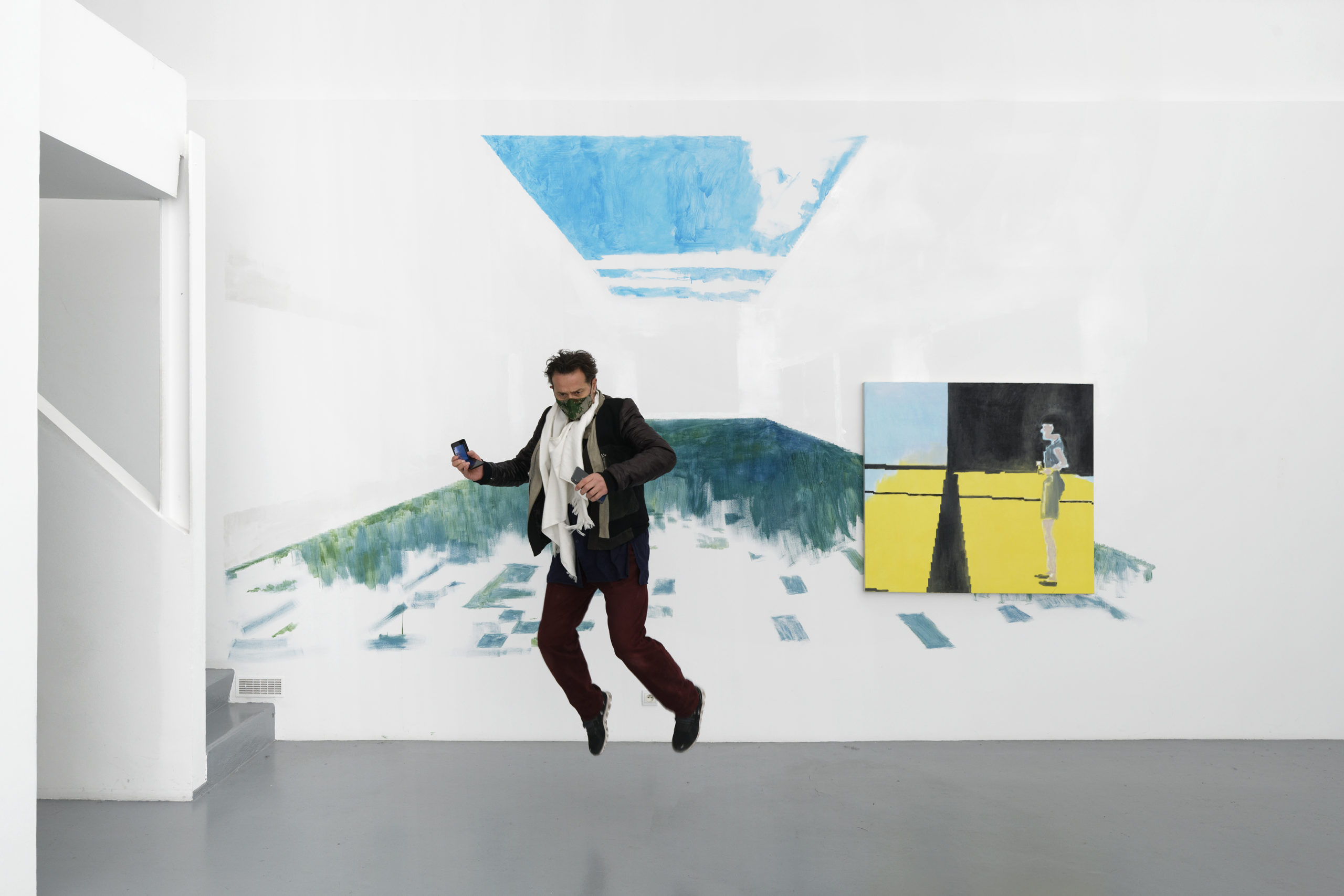 Miltos Manetas is a Greek artist in constant search of technological empathy, feeding on synergies made up of encounters, readings, cultures and places without borders. Having started in Greece to discover new ways to feel alive, his art ranges between hardware and software. Oil paintings, digital canvases, and immersive realities become unprecedented still-lifes situated in floating studios around the world.

“If I go to a place I never stop passing, I always return because my studio is everywhere, even if a friend can become an enemy. It becomes impossible for you to ignore me, because somehow I force you to work with me and my presence becomes an avatar wherever I build my floating studio page. This way of being is very Greek.”

After reading Neal Stephenson’s post-cyberpunk novel Snow Crash, Manetas’ work Metaverse was created in New York in 1998 in collaboration with artist and architect Andreas Angelidakis. In 2000 he founded NEEN, an artistic movement offering the public a new way of understanding and experiencing art. It aimed to conflate the new technology of the time with art and poetry, launching from the Gagosian Gallery in New York. “I think this American experience started NEEN,” he says, “with a sort of virtual simulacrum dedicated to art and architecture. In addition to mine, there were studios friends including Takashi Murakami and Vanessa Beecroft.” How was NEEN conceived? In 1995, for the exhibition Traffic, art critic Nicolas Bourriaud (who helped launch the Relational Aesthetics movement in the late 90s) brought together artists Maurizio Cattelan, Vanessa Beecroft, Gabriel Orozco, Jason Rhoades, Rirkrit Tiravanija, and Manetas, among others.

Manetas was born in Athens in 1964. He studied at the Accademia di Belle Arti di Brera in Milan. Named by The Guardian as “El Greco of the geeks”, Manetas’ work has been shown at international venues including the Centre Georges Pompidou (Paris), the 2018 Athens Biennial, the ICA and the Hayward Gallery, both in London. For Manetas, who divides his time between Rome, Athens and Bogotá, every journey is synonymous with interior research. In recent years, specifically in the Colombian capital, he found inspiration for the next NFT and Floating Studios projects that he’s carrying around Europe.

FRONTRUNNER is pleased to present a conversation about the future, from an artist who witnessed it from afar.

In 1996, the French theorist and curator Nicolas Bourriaud invited me to participate in his exhibition “Traffic” at Bordeaux’s CAPC. With this show – which resulted in becoming the most important exhibition of my generation, Bourriaud was introducing the idea of Relational Aesthetics: “a set of artistic practices which take as their theoretical and practical point of departure the whole of human relations and their social context, rather than an independent and private space.“ Most of my friends were included in that show, between them Maurizio Cattelan, Vanessa Beecroft, Gabriel Orozco, Jason Rhoades, Rirkrit Tiravanija, Pierre Huyghe, Philippe Parreno, Liam Gillick, Douglas Gordon, Carsten Holler, Xavier Veihlan and Dominique Gonzalez-Foerster. Relations- Bourriaud had noticed- were at the centre of our Modus Operandi, with a certain type of aesthetics rising as a result chosen by the attitude of each artist. Our attitude and our tools: at that moment, I was supposed to be “the one of the computer”. I had bought a laptop and without really knowing how to use it yet, I was bringing it everywhere. We were doing performances together. “We”, myself and my laptop, we’re connecting with…the wall. When Nicolas revealed his concept of Relational Aesthetics, it felt a bit antiquated to me, mostly because of the way it sounded. I remember asking him, “Would computers like it?” Back then, we didn’t use the Internet that much. Still, computers had already become important for our lives.

My laptop was called PowerBook and it was important for me the way a “friend” is important. There was another friend; I had also acquired Apple’s first digital camera, QuickTake. Such names, PowerBook, QuickTake etc. were important because they would make it clear for us that the hardware they were representing was not the usual machines we were accustomed to. That the presence of digital machines was a peculiar presence”.

These objects traced a new historical period in the world of art, as well as technology. How did the neologism NEEN come about?

Observing these new machines which had start registering their life and ours, machines that looked as if they are thinking, I realized that there’s something new to be said, a new narrative. It was as if these machines were inhabited by some kind of not-human artists. We had started working together with that “people” now so it was necessary that someone would come up with a proper word that would represent all that.

Inspired by DADA – which mistakenly I considered a palindrome – I was looking for a term. Because nobody would invent it, I continued calling it what I was doing: “Relational Aesthetics ‘. Then, one day, on a flight from New York to Europe, I read in Wired Magazine about LEXICON, a California- based company responsible for the terms PowerBook, Pentium (Intel’s fifth-generation microprocessor), BlackBerry and many others. LEXICON, whose own name means “Dictionary” in Greek, was asking $100,000 to coin a term back in 2000. I found that money and about five months later, I received a fax with a list of candidates. Between those, there was NEEN, an uncomfortable-sounding little word (which was a palindrome) and which neither my pals on this project nor the people from LEXICON liked back then. It wasn’t coined by humans, but by a proprietary software the company was using. The linguists had simply input the word “screen” and the software squeaked out “NEEN”. Instead, everyone seemed to like “Telic”, a word coming from the Greek “Telos” (which means “end”): we have reached the end of something, and now there will be a change. Then, my very young Japanese collaborator said, “I wanna be a NEENSTER”, which we misunderstood as “NEENSTAR.” I decided to go with NEEN, which in English has the same sound as an old-Greek word which comes from the Latin “Nunc”, meaning, “exactly now, not a second later.”

NEEN was officially born with a conference/performance at Larry Gagosian’s gallery in Chelsea, on the last day of May 2000.  That was at the same time the stock of the Silicon Valley companies collapsed: The World and its computers were embarking on a period of “new realism.” Days of Telic, NEEN was desperately needed. Mai Ueda and I left New York for Los Angeles and we opened the ElectronicOrphanage: a space where we would invite creative young people and I was paying them 8.00 USD per hour to do nothing. They could play video games, or get lost as much as they wanted on the Internet-Safari, but if they would start making art or design, they would lose their job. That’s how the first NEEN works appeared, little flash animations that lived on the web. A few months later, the first early NFT also arrived.

What was the first work of the movement?