Daniele Sigalot: When Being an Artist is an Option 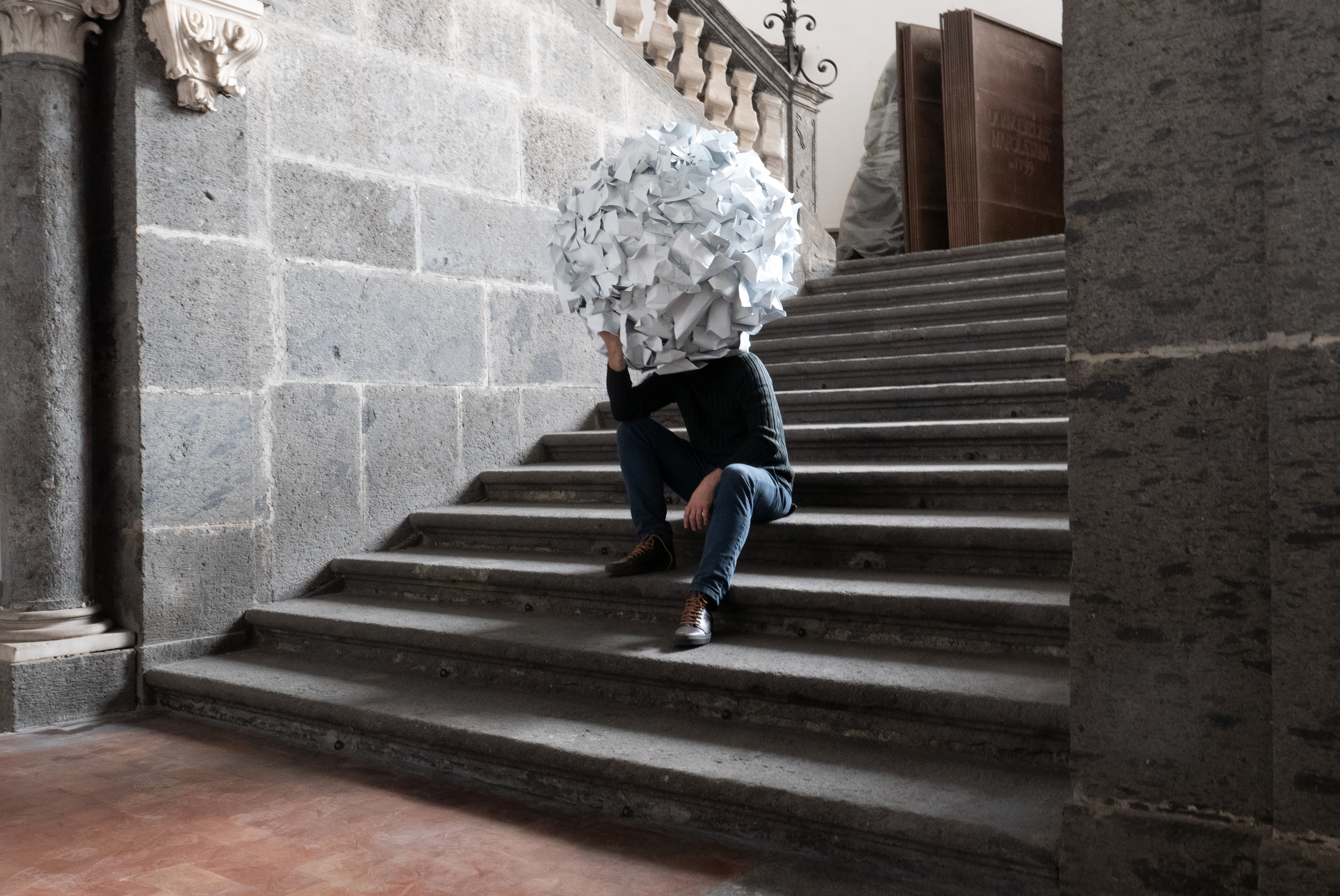 “I didn’t want to be an artist. It was an accident”.

So, Daniele Sigalot (Rome, 1979) talks about himself in his studio-atelier La Pizzeria in Napoli. A former publicist in London, Sigalot talks about the beginnings in the field of art and his future projects, between Italy and the rest of the world. His works question the question, between what it seems and what it really is. Starting from airplanes that look like paper, but in reality they’re made of polished or colored aluminium. Sigalot fully represents his world of contrasts and contradictions that find logic between journeys and ideas that arise during work. So many bad ideas to find the right one needed to plan the next trip, the next project in the world. Therefore, failure as a form of regeneration. FRONTRUNNER meets Sigalot, and he jumps right in.

In 2007 I worked in advertising, in pairs. I was a creative at Saatchi & Saatchi and we were assigned, for six months, to the Italian client Barilla (Alixir) in Parma. One day, Guido Barilla told me, “I asked for a dream, you gave me a nightmare.’” So I resigned and with Fabio La Fauci (with whom I had already worked on artistic projects in my spare time), we founded “The daunting adventures of Blue and Joy”: a project that involved two characters with contrasting personalities and was born of the rejection from the advertising world. Because we were forced to sell winning ideas.

So the studio-atelier La Pizzeria was born in Berlin. Why this name and why in Germany?

The choice of Berlin was an accident. During the Blue and Joy period, we were looking for a place to open the studio. We went to Barcelona where rents were more accessible until 2008, then we moved to Berlin. A lively city, full of energy, where they sleep little. The name La Pizzeria was born to go against every stereotype: the Italian in Germany has credibility only if he works in the kitchen, and so I wanted to make fun of them. Then came Dario Capodiferro, who joined us in the studio and with whom I still work today in Napoli.

From Berlin to Napoli. A return to Italy after so many years, in a city full of contrasts.

I had been to Napoli several times, also for the exhibition Even the wind gets lost in Napoli that we mounted in 2014 at the Palazzo Reale. But in reality after Berlin, Milan and London – cities forgotten by the sun – I needed a different climate and I always felt good energy in Napoli. The people we met were excellent ambassadors. Napoli is an economic city and I also chose it to be closer to my girlfriend.

The idea came together with Fabio La Fauci. The puppets we made until 2013 were often traveling on a flight that eventually crashed. The first plane was “Friendship1”. The “Blue and Joy” duo lasted from 2006 to 2014, so Fabio decided to work alone as a painter. In 2016, with the exhibition Perdere il plurale at the Glauco Gallery in Milan, I opened my first project. But the big show was All is already Yours at the Royal Palace of Caserta in 2017.

Tell us about the Bourbon Palace experience.

I visited the Royal Palace of Caserta alone. The title All is already Yours was conceived in the library where one of the Ercolano excavation atlases was located, with the words of academicians dedicated to King Charles III of the House of Bourbon. The exhibition was divided into seven rooms, each with a different language: totems of ideas, post-it notes, airplanes, medicinal capsules and the “Enough” digital clock (with double power that counts down from 28 April 2016 for a thousand years). I am fascinated by the creative process, after seven years in advertising and twelve in art, all I do is produce ideas. The exhibition was an opportunity to work on the failures, even thinking about “Blue and Joy”.

What did Berlin leave you?

After ten years in Berlin, I have so many memories. I fell in love three times and left good friends like Dario Puggioni and Cristiano Tassinari. Then, apart from the cold in the bones, it left me with too many wrinkles.

What do you expect from Napoli?

I expected to make interesting projects. There is a show currently in the works at Villa Pignatelli. In Rome at the Spazio Chirale with “1000 years from now”, we presented a new version of “Enough”. I hope that some American museums will welcome the work. Now there are lithium batteries, but in the future? Similar works can be found in Istanbul and then for a three-month period at that Palazzo Tagliaferro in Liguria. In a few months, there will be a great project at Milan Malpensa airport.

Daniele Sigalot
Everything that could have been but wasn’t, now is (2019)
Installation view
Einmal ist keinmal, Anna Laudel Gallery, Düsseldorf

At the airport? Everything comes back to planes.

The project is called “A portrait of everyone, everywhere” and it’s probably the biggest installation that I’ve realized. I like to observe people, imagine their stories, and travel. I like the term “passenger” because when we leave, we are already a little different from when came. Made with the support of Magistris & Wetzel, the work consists of 24 maps, with 24 cities on the planet that will be installed in the spaces of The Magic Threshold. Each map is a “supermirror” of a polished steel panel, where passers-by will find their own reflected image that changes depending on the city. Twelve in the northern hemisphere and twelve in the southern hemisphere, from Los Angeles to Tokyo and from Rio de Janeiro to La Paz.

Tell us about your Coppa Pizzeria project.

It is a two-on-two football tournament, on an asymmetrical field with particular rules: corruption is part of the game and in fact, the referee Dario Capodiferro can be bribed. The project, which includes a gala evening, was conceived in Berlin in the courtyard of the studio during lunch breaks with some artists who came to help us. 8 teams, then 16 players. The first year, we had 5 spectators. The following year, 40. The only rule that must be respected is that the players who participated in the previous edition have a place secured in the next one. Many artists and creatives participate, the Coppa Pizzeria is a mixture of Carnival, Oktoberfest and a soccer world championship combined. The prize is a slice of pizza dipped in resin with glitter – so, it’s not really a nice prize, thus those who win would be ashamed to receive it. Instead, the “Narciso Award” is assigned to the “Best Look” worn during the event; it’s a ball made from mirrors or polished aluminum. During the Coppa everything is possible, even betraying Il Palazzo, that is me.

The ninth edition was held in Napoli at the Foqus Foundation in the Spanish Quarter. And the next one?

The last edition is always the best, indeed the next. The truth is that there is more and more care taken in the dressing up. I created the container, but completing the project belongs to the ideas of others. The next edition will be held on 17 May on the island of Capri, in Anacapri.

As you’re always traveling around the world, how do you consider the contemporary art scene in Italy and abroad?

I’m not a great lover of contemporary art [laughs]. The truth is that we are too many and often the quality is low. The second truth is that in the world of art, everything comes in and alongside good people there’s a lot of superficiality. Art is not a science, nor a sport.