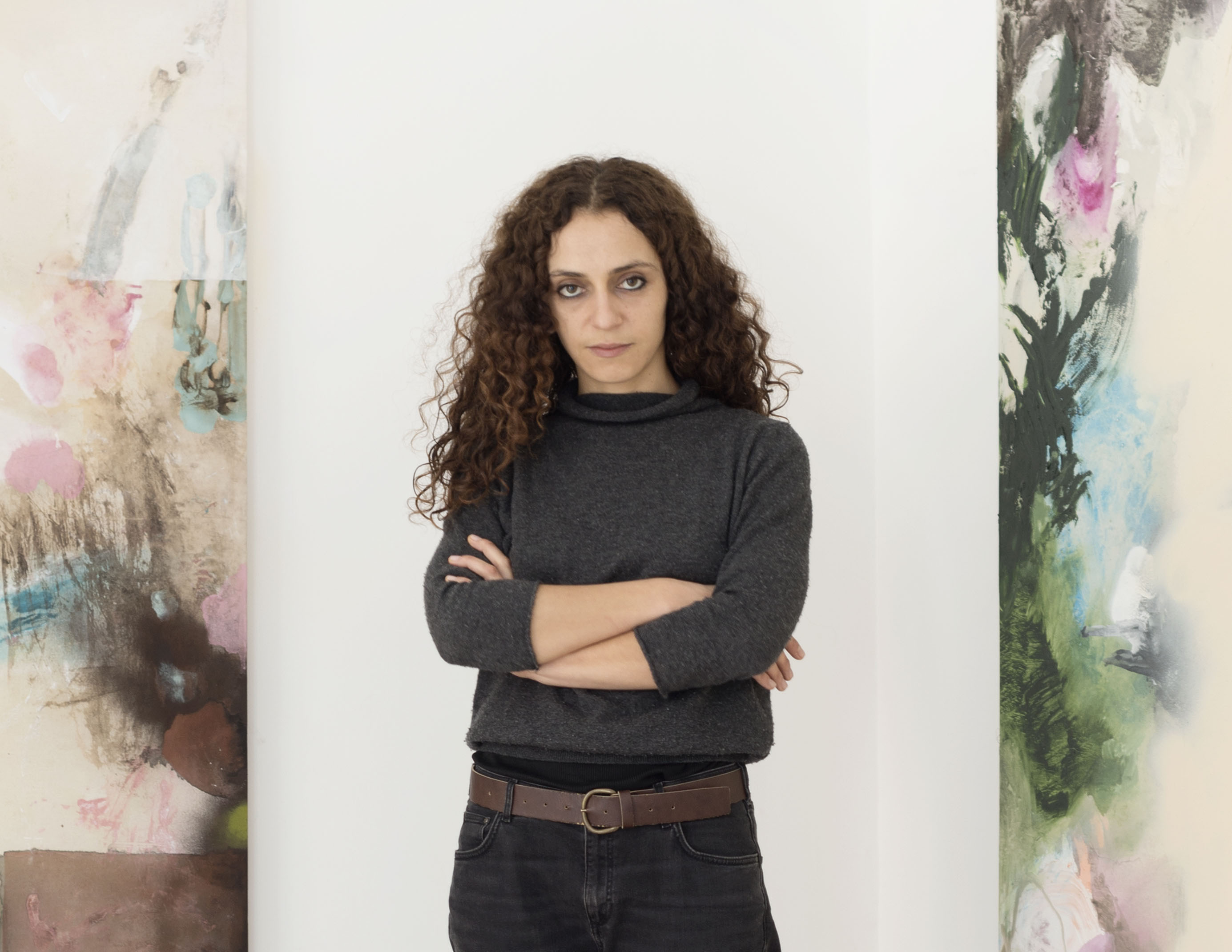 The colors of her works are reflections of her soul. Between the end and the beginning of the next color merging onto the canvas, those emotions and sensations are impressed. She’s made her life a continuous meeting and getting back into play, somewhere in the world. Caterina Silva’s (b. Rome, 1983) work is a continuous flow of elements that intersect to reacquaint herself each time on a new journey, in a new foreign language. Those coincidences draw a precise path between the spirituality and elegance of the body, ultimately finding dimension and shape in her paintings and performances. A process of the senses, a sort of synthesis in which reason gives ways to the intuition.

Silva studied at the Camberwell College of Arts in London and received a BA in Scenography at the European Institute of Design, followed by a degree in Philosophy at La Sapienza  (Rome) and continuing her education in Amsterdam. FRONTRUNNER reached out to Silva not only to get to know her from an artistic point of view, but also personally. Because in the end, “The figure of an artist does what (s)he is”.

What pushed you to become an artist? When did you take your first steps in art?

The need to understand myself and the surrounding world pushed me, and then the will to transform it. I wanted, and want, to find alternative languages with which to express desires and imagine possible worlds, to realize utopias, to unhinge dynamics of power. The first steps were in the world of entertainment and theatre, and then went on to art. During high school, I went to a studio to learn the trade from a painter in Rome. I was copying Michelangelo and Raphael. At eighteen, I left for London on a scholarship to the Camberwell College of Arts.

Which techniques do you prefer?

Starting from a choice of colors, how does your work come about?

I proceed through cycles of works often linked to each other. The colors I use depend on where I live, so they change often. For me, painting is a constant practice that occurs at all times and concerns life. The works are already present in a dark part of my mind, the pictorial process only makes them emerge as images.

Which work or performance tells the most about you, and why?

Gravity (2012), because it marks the end of one part of my life and the beginning of another.

Artists often find inspiration while traveling. Can the same be said for you, or are there other ways that lead you to find ideas for your productions?

I prefer the word “displacement”, less soft travel, implies the idea of a break and a sudden change of perspective. Through this continuous movement, I know and absorb different stories, people and landscapes. I don’t always have the time to process them and make sense of them. In parallel, my obsessions flow over language and power, eroticism and mysticism, freedom and impersonality.

Among your numerous journeys, what is the experience that undoubtedly marked your artistic and individual persona?

The artists I met and the life of the cities in which I lived marked me. The solitude and exaltation that induce big cities. In 2011 I spent six months in New York. It has been a very intense period. I knew the work of Agnes Martin, Blinky Palermo, Lee Lozano, Robert Ryman, Richard Tuttle…

The reasoning on the pictorial gesture that I was making was completed to give space to other things, it was powerful.

The woman in art, between symbol and revolution. What is your point of view?

Revolution is a daily struggle practice. I think it is important to support each other, not only among women, but also between subjectivity on the margin. We must write together the missing parts of our history in the language we prefer most, without bending to the language of power, even risking not being understood immediately.

What is your relationship with art fairs and galleries? Do you think they are decisive for an artist’s career?

I believe in art as a spiritual attitude and an instrument for changing reality. The art system (galleries, fairs…) is a circus but it is the reflection of a more complex macrocosm. I am interested in criticism of the system when it occurs within the work, in its act of profound resistance to language. I am interested in those practices that manage to remain radical and rigorous regardless of whether they are inside or outside the system: I am thinking of artists such as Marie Cool and Fabio Balducci or the painters Jutta Koether and Charline Von Heyl.

The works come from another world and take away the idea of career that the system wants to build around it. Gallery owners can be friends and allies, like Lana and Alex from Bosse & Baum in London for me.

What are your future plans?

I’m trying to understand how and if to continue my nomadic life in the world that will come, post-pandemic. I’m working on a new cycle of paintings and a performance film.

Where would you like to set up your next exhibition?

I’d like to set up an exhibition in a church or in a forest. Have a big party, fireworks, or in the desert, or in a museum!