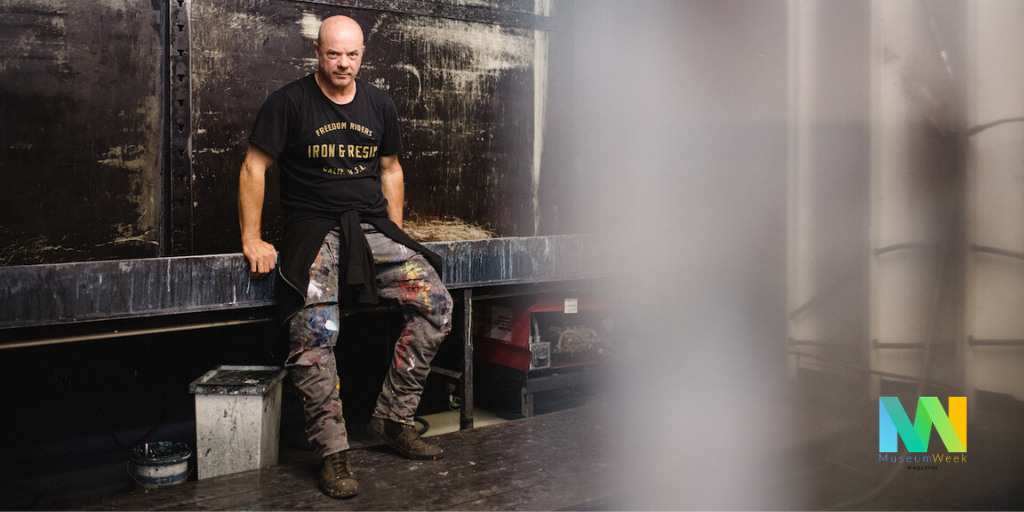 1.In your opinion, what is the role of a museum?

An art museum, I believe, should excite educate cherish and communicate.

One of my favorite museums are the Uffizi Galleries in Florence. I love to walk through the galleries and inhale western art at it’s spectacular best in only ten paintings. From the two-dimension Russian icons, to the discovery of painting and the birth of three-dimensional painting with Giotto, to La Primavera and the Birth of Venus by Botticelli, Michelangelo, Leonardo Da Vinci, Raphael, Titian, Caravaggio, ending with the beautiful flesh of Rubens, all in ten paintings.

Instagram, it reveals my secret life, my process my thoughts, it’s remarkable what it reveals.

4.To create greater engagement among museums, artists, and professionals, do you have any advice for cultural projects such as #MuseumWeek?

Be outrageously, brave and bold.

Russell Young was born in the north of England in 1959. After studying photography, drawing, cinema and graphic design, he moved to London and collaborated with the photographer Christos Raftopoulos. He began his career as a photographer for the REM, Bauhaus and Smiths concerts, among others, and in 1986 made the iconic cover of “Faith”, George Michael’s first solo album after Wham!, which won a Grammy Award in 1987.

Today Young’s production concerns exclusively painting (with diamond dust too), screen printing, sculpture and installations, and in 2003 he launched the series of paintings entitled Pig Portraits, serigraphs that portray photos of celebrities. He has exhibited in galleries and museums around the world and the works also are in the collections of Barack Obama, Aby Rosen, The Qatari Royal Family, Kate Moss, Brad Pitt, David Bowie, Liz Taylor, Albertina Museum and Saatchi Collection.

In 171 years of Harrods, for the first time in history it has allowed an artist, Young, to exhibit in the iconic London showcase for the Harrods Halcyon Gallery.